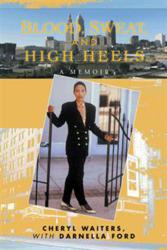 Women now make up about 9 percent of the construction industry in the United States, according to the National Association of Women in Construction. This percentage includes those workers in office-based positions; the percentage of women who work in the field is much lower. But in the late 1970's 9 percent would have seemed incredible. In 1978 President Jimmy Carter launched a nation-wide goal of increasing the number of women in the construction workforce. His goal? 6.9 percent. Women and construction: to many Americans it's no match. This makes Cheryl Waiters' story all the more inspiring.

In her new memoir "Blood, Sweat, and High Heels" (published by iUniverse) Waiters chronicles her rise in becoming a successful electrician and how, in the process, she made history.

From all accounts, Waiters seemed destined to become a leader in the field of construction. Born into a family of construction workers, she nursed a love for math and science and eventually pursued a career in mechanical engineering. But Waiters was told early on that construction was men's work and that she would be better off focusing on "women's work." What exactly was "women's work" , Waiters never found out.

Instead, with an impressive amount of tenacity and resilience, Waiters set her sights on helping President Carter meet his challenge, starting with herself.

Waiters made her historic debut while building Jacobs Field, the Cleveland Indians baseball stadium, and the adjacent Gund Arena, home of the Cleveland Cavaliers. Waiters' work on the two buildings gained her world-wide attention. She has been featured onGood Morning America and Today in Cleveland.

"Blood, Sweat, and High Heels" presents an intimate, candid portrait of Waiters journey. Waiters, shares openly about the gender and racial prejudices she faced during her career. She approaches other topics — labor unions, Mafia-controlled operations and the changing social atmosphere of the 60's and 70's — with the same commitment to clarity and forthrightness. Waiters also shares her moments of triumph and speaks directly to young women on how they too can realize their goals in the face of great adversity.

A third-generation, internationally-recognized electrician, Waiters can now add "author" to her resume. With "Blood, Sweat, and High Heels," Waiters has not only written a thoughtful memoir, but also a self-help guide that spotlights her overall message: what one woman can do, other women can do.

Cheryl Waiters has been a professional electrician for the past 20 + years. She topped out as a journeyman and holds the distinction of working on some of America's most important landmarks. She currently resides in Cleveland, Ohio.

"Blood, Sweat, and High Heels" was written with Darnella Ford, an award-winning novelist.

Get your Copy today!